Kalleri is a small village located in Dhading, near to Galchi. Most of the houses were destroyed in the earthquake. We have been working with Yogdaan Foundation to build a community center and teach the villagers how to rebuild their village.

The earthquake brought a lot of destruction to Kalleri. It was a hard time and this is when the village committee and people in the village started talking about building a community center, which could be used as a meeting point and shelter in case of another earthquake or unforeseeable event.

Build up Nepal has been serving as the reconstruction partner to Yogdaan Foundation. We have setup a machine and trained a group of local entrepreneurs in Earth Brick (CSEB) production. The entrepreneurs and local community has been working very hard. The construction of the Community Center was completed in 2017!

There was a a bit of skepticism in the beginning of the project as Earth Bricks was a new technology for them. However, once the walls were starting to come up the people in the village were getting much more positive. They started realizing that Earth Bricks mean that they can build their own brick houses, a dream for many people in rural areas of Nepal. A few of the advantages they see with Earth Bricks is that it is fast to build with as there is no need for plaster and less mortar is needed.  They have produced about 10 000 Bricks in Kalleri and they tell us that that the team work has been good.

The community center will be used by the whole village for meetings, weddings, the women groups, trainings etc.. During the construction of the center we trained the locals in how to build earth quake resistant so that they can rebuild their own village. The village is now working to finish the last details of the community center and will soon hold an opening ceremony.

At Build up Nepal we are very happy for the progress in Kalleri. The community center is a big milestone but the reconstruction work has only begun. With recent government approval of Earth Bricks technology the locals are now starting to produce bricks for their houses, which they will build next! 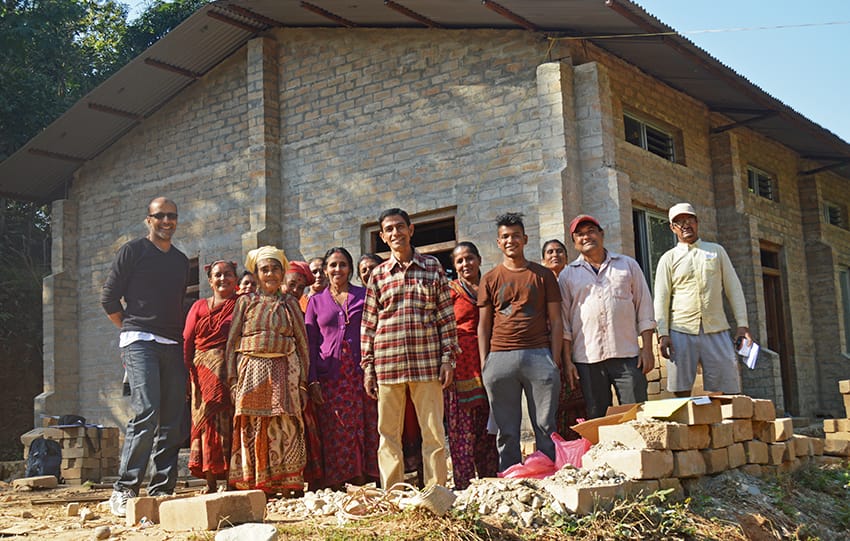 The project is funded and initiated by Yogdaan Foundation and Nepalese of Tampa Bay who is working for long-term relief and reconstruction after the earthquake. Yoagdan foundation is supporting this village with the reconstruction and the construction of the community center is only their first step.